I See Collections on 5th September 2019

This one’s for the sea bird lovers out there – My word; they’re amazing and fascinating creatures to watch aren’t they!

Every time I capture an image of any of these wonderful birds I feel so privileged. This is for so many reasons, but I must say a top reason is just how difficult it is to even get close, let alone create an interesting composition!

The results you see on our website were chosen from a plethora of ‘near misses’ if you know what I mean… Of course, it’s their nature to move quickly and keep away from danger, but being patient, ‘still’ and persistent occasionally pays off!

The Puffin especially excited me. We had been on a few trips to the East Yorkshire coast but not been lucky enough to see any, or they were so far away it really was just proof they were there!

So, the 2 x canvasses we have on the website were from the same trip. We’d walked the length of the cliffs and although we’d seen some darting in and out of the nesting areas, all were so far away. Then, just by chance I walked to the edge of the cliff; before turning back at the end of a long blustery day… and there it was, looking at me. I don’t know if it was male or female, but let’s say ‘he’ seemed to be as curious about me as I was about him. It took all my self-control not to ‘squeak’ with excitement! Fortunately I had my long lens to hand, so the 300ft drop between us wasn’t quite as daunting as it might have been!

Take a look at the results. I chose to use 2 of the images and created a monotone background for one of them to show off the wonderful and distinctive multi-coloured beak. The other image is natural, with the typical curious ‘look’ he was giving me.

Shortly after I took these photographs another bird landed (basically crashed in chest first) and pushed the Puffin away, who hopped off the edge of the high cliff, legs splayed and in what looks to me like a chaotic flight; but of course, this is just how they are!

Equally exciting but in a completely different way was the chance encounter with some Turnstones, which must have flown a very long way to land on the North Yorkshire coast that day. The curious birds dotted and darted about, shifting from rock to rock as they did so.

I chose a few images to put on the website. One is a ‘collage’ of images to represent their group behaviour and another one in isolation; that actually must have looked at his own reflection in my lens, he was so close to me! Again, fascinated, I stood there quietly for hours as they dotted and darted about.

Another ‘story’ I wanted to tell, was about the ‘Sea gulls’ at Whitby North Yorkshire. It took several trips to gather the reference I needed to recreate an artwork that represented the “Fisherman’s Return”

It was a cold February day, when the small fishing boat returned to the harbour. They chose a sheltered spot behind the harbour wall to sort through the ‘catch’. But of course they couldn’t escape the gulls! I observed them for a while as they circled and seemed to communicate with each other constantly screeching, swooping and collecting new recruits as they did so.

The artwork is created with a combination of reference material. The main image represents the fishing boat, harbour wall with a back drop of the town behind. You can see the famous church creating a silhouette on the horizon. However, my challenge was to capture the circling gulls that, to me, were a key part of the scene. I wanted to create a perspective and distance between the boat and the circling gulls. I did this by creating an additional layer to my artwork. This is transparent, hand painted layer front and back, placed in front of the background image; to try to represent the (actually quite aggressive) gulls and they circled over head systematically diving at the fishermen’s boat and surrounding water.

For all of our images, final results are assembled or printed and framed individually. They are created to order; so every artwork is completely unique, not mass produced! Find out more about the specification of the all the designs in our shop 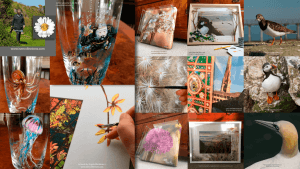 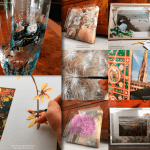 Art and Gifts for the Home 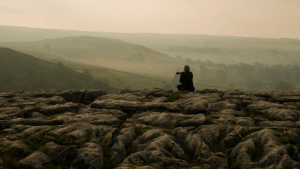 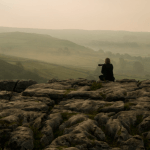 As the sun rises at Malham Cove 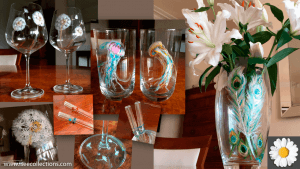 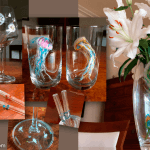 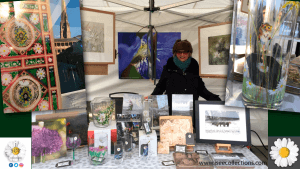 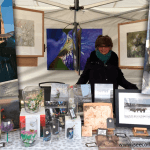 Our first Christmas Fair – at The Piece Hall Halifax

Made in the UK

We only use trusted suppliers

PayPal / MasterCard / Visa
We use cookies to ensure that we give you the best experience on our website. If you continue to use this site we will assume that you are happy with it.Ok